The Prospect of Puerto Rico as the 51st State

It is a universal truism that Puerto Ricans are sexy; or at least, Travel + Leisure magazine says so. In the magazine’s annual “America’s Favorite Cities” survey, the Puerto Rican capital of San Juan ranked first for attractiveness. Interestingly, another ranking has gone unnoticed for over a century: Puerto Rico ranks first in the number of years as a colony. Characterized by a colonial period of more than five hundred years, Puerto Rico switched its colonial oppressors in 1898, following the Spanish-American war, when Spain ceded it to the United States. Since then, the island has been in a nonstop quest for self-determination. This quest has been marked by Puerto Rico’s “transition” into a U.S. Commonwealth in 1952 in which Puerto Rico had the opportunity to write its own Constitution, but complete authority still vests upon the United States Congress. Today, Puerto Rico stands as the territory with the longest transitional period between acquisition and annexation. The island has been the subject of many debates regarding the morality of the second-class citizenship imposed on the Puerto Rican people. These imperialistic practices by the United States should be archaic at this point in the twenty-first century; thus, the colonial status should be eliminated in its entirety. In the name of justice, it is time for Puerto Ricans to stand strong and united to call for change. And this change will be met, preferably, by achieving Puerto Rico’s annexation as the Union’s fifty-first state.

Although political leaders in the mid 1950s saw the Commonwealth as a transitional step, it had come to be a permanent one until Puerto Ricans called for change in November 6, 2012. In a territory-wide referendum that questioned “Do you agree that Puerto Rico should continue to have its present form of territorial status?,” 54% (958,915) of Puerto Ricans that voted favored a change in the current territorial status.

Those that stand for Puerto Rico’s decolonization favor statehood or independence. These two options are inevitably linked because they search for the self-determination of four million citizens. Accordingly, many people consider statehood as the logical and best alternative for Puerto Rico’s future. If Puerto Rico were to become a state, many positive changes would definitely impact the island. First off, Puerto Ricans would receive the same rights, privileges, and responsibilities that are currently being denied under territorial status: they would be able to vote for the president (although US citizens, Puerto Ricans do not have the right to vote in US presidential elections); they would have representation in the federal House and the Senate Congress; Puerto Ricans would pay federal income taxes and be apportioned certain benefits which are currently reserved for states; and Puerto Rico itself would receive increased federal funds similar to those that U.S. mainland states receive. At the same time, statehood would have a positive impact in Puerto Rico’s economy by providing added incentive and support for economic reform as a critical driver of economic growth. Additionally, Puerto Ricans that serve in the military would finally have the right to vote for their Commander-in-Chief considering Puerto Rico is proportionally one of the largest jurisdictions with men and women soldiers.

In essence, Puerto Rico has been the subject of modern American colonialism, and it is time to desist of this injustice. Although some may argue that Puerto Rico is not a candidate for joining the Union due to its different culture, those do not consider that Puerto Ricans have demonstrated that they are proud of being part of a founded upon principles of inclusion and diversity. However, Puerto Ricans are currently denied access to the quintessence of American thought: liberty and justice for all. When decisions are made, Puerto Ricans are not around the table. As Governor Luis Fortuño said “we should either be in or out.” For this reason, Puerto Ricans should make their voice be heard to assure that some day they have no reservations when declaring that they are part of “…one nation, under God, indivisible, with liberty and justice for all.”

*This article was initially posted as an entry to the Red & the Blue Blog at the University of Pennsylvania. 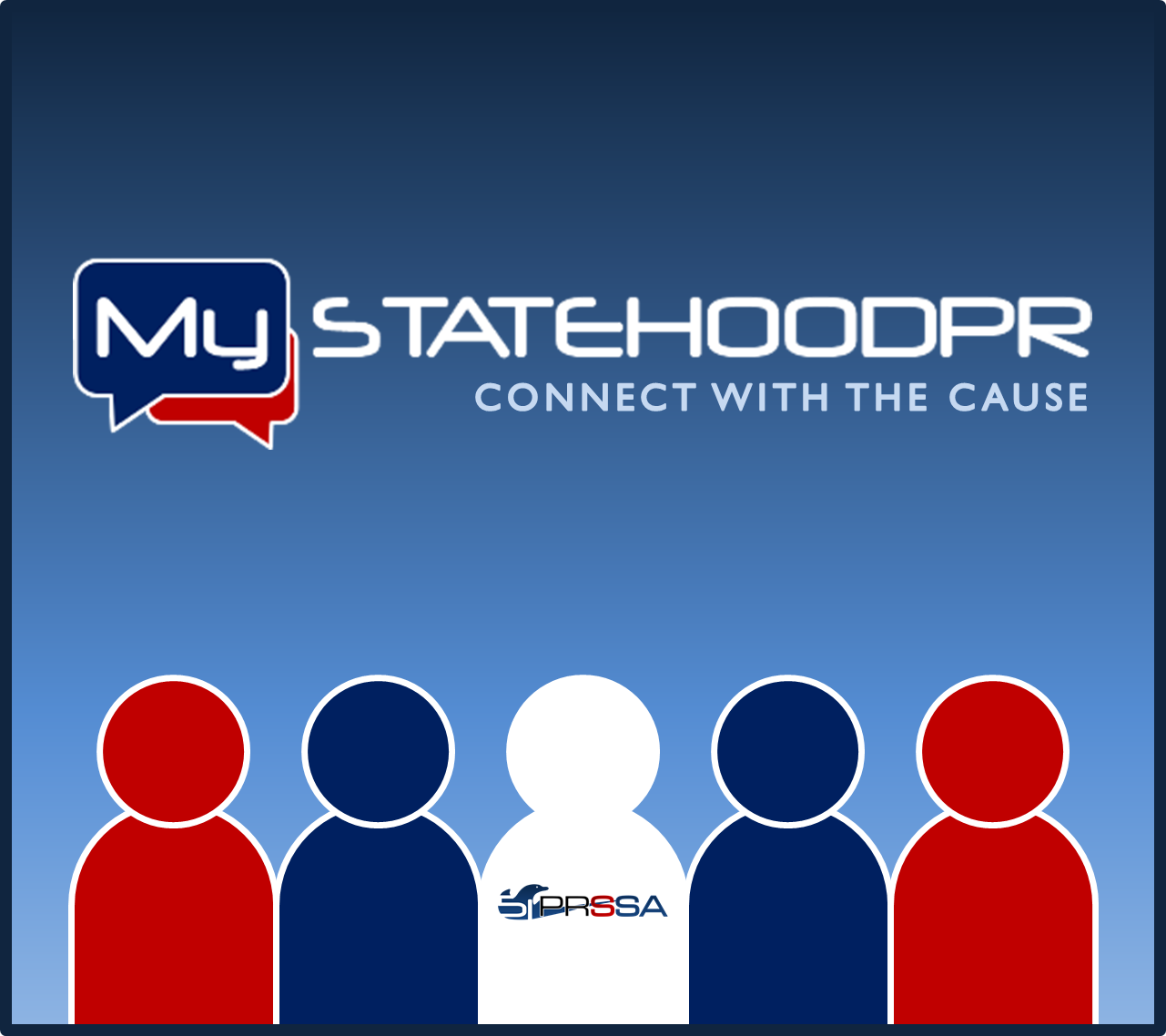 SAN JUAN, PR: The Puerto Rico Statehood Students Association announced the launch of its social network MyStatehoodPR under the theme of: Connect with the cause. The network represents an unprecedented effort to connect the members of the oganization, as well as pro statehood citizens in Puerto Rico and the states.
“MyStatehoodPR joins our presence in social networks such as Facebook, Twitter and YouTube; this presence has been essential to our efforts since the reactivation of the organization in 2007” stated William-Jose Velez, Executive Vice President of the PRSSA. “With this unprecedented portal, we translate the passion of the youth to cyber activism” added Eduardo Soto, President of the association. END_OF_DOCUMENT_TOKEN_TO_BE_REPLACED

Equal Citizenship is now Closer than Ever

The White House Task Force on Puerto Rico report came out today and it is now available at the PRSSA website. While providing unprecedented recommendations for economic and social development, the report also addressed the status issue and outlined the legitimate options for Puerto Rico’s political future.

Statehood and independence were described once again as viable options, but the report described the Commonwealth or Estado Libre Asociado as an acceptable choice. However, it did not undermine the ELA’s territorial nature. The report explicitly described the current status as subject to the Territorial Clause of Article Four of the Constitution. The Task Force expresses its preference for a two-tier self-determination process. The report’s recommended format creates two venues: a continued relationship with the federal government or separation via independence options. A continued relationship with the federal government encompasses only statehood or the current territorial status. The independence options include free association and stand-alone independence. END_OF_DOCUMENT_TOKEN_TO_BE_REPLACED